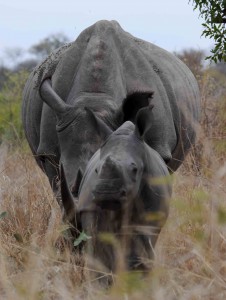 A key additive to the Sabi Sand treatments is an indelible pink dye which exposes the presence of smuggled horns on airport scanners worldwide and warns consumers that the ground-up product is hazardous.

Consumers can become very ill
Consumers of the powdered horn in Asia risk becoming seriously ill from ingesting a so-called “medicinal product” which is now contaminated with a non-lethal chemical package. The 49,500 hectare Sabi Sand Wildtuin has launched the country’s first large-scale operation to toxify the horns of its rhinos, together with an indelible pink dye which exposes the illegal contraband on airport scanners worldwide.

Many world famous safari properties on the border of the Kruger National Park are engaged in a costly struggle against relentless rhino poaching. The Sabi Sand Wildtuin Association of property owners this year will spend R6.5m on security operations to intercept and head off the incursions – a budget allocation which has tripled since 2008, when the crisis first came to the fore. These defensive strategies, undertaken with the police and SA National Parks (SANParks), are facing heavily armed and highly motivated gangs.

The poachers themselves, the starting point of the criminal traffic inside and around the Kruger Park, receive a mere fraction of the R2-2.5m value of each horn from the syndicates that plan the raids and export the material. Yet the size of their pay-offs in the neighbouring low-income communities is ample enough to keep the poachers safe from being identified.

Poaching stats
Intelligence is a prime asset in the escalating conflict. For this reason the numbers of rhino located in the area are kept confidential, as are the numbers lost to date. The national statistics are harrowing enough to the future of wildlife conservation and game tourism. The first spike in the incidence of rhino poaching was in 2008, when 88 animals were lost. This year more than double that number have been butchered in only the first three months.

Lorinda Hern of the Rhino Rescue Project, who has co-developed the ectoparasitacide treatment since 2011, measuring the horns for research purposes while Brent Leo-Smith assists.

The Sabi Sand Wildtuin Association’s game-changing toxification campaign is as much about sending a message to the illegal trade worldwide as it is about rendering the rhino horns inside its perimeter both worthless and hazardous as traditional medicine.

Andrew Parker, 41, CEO of the SSWA, says that compromising the product is the most effective deterrent to the illegal market.

Epicentre of rhino poaching
“Sabi Sand is leading this programme because we are located at the epicentre of the problem at the southern end of the Kruger Park, which suffers up to 70% of the rhino killings. Poaching syndicates are here in large numbers and we are vulnerable as a western buffer between them and the Kruger Park.”

2000 employees
Up to 2,000 people are employed in the Sabi Sand reserve, mostly local residents. Information about planned anti-poaching operations becomes common knowledge very quickly outside the perimeter fences. The intelligence is worth tip-off money. Poacher gangs can then blend into the community and enjoy unquestioned access in and out of the Sabi Sand area along the shared local roads.

“We are sending a message through the supply chain that rhino horn from Sabi Sand will endanger the health of anyone who uses it as a medicine,” says Parker. “It also raises the stakes against agents smuggling it through airports. When their market dries up we expect the balance of risk against reward will swing back in favour of our own conservation operations.”

Those operations are essentially defensive, counter-measures based on the surveillance of the daily movement of game and its natural predators. Poachers infiltrating the reserve are spotted and tracked as a matter of course and the information is fed into the communications network shared by the Big Five game lodges and the rest of the Association’s 42 members.

Increased arrests haven’t halted poaching
The decision to launch the rhino horn infusions was agreed unanimously by the association’s members in February, says Parker, as the poaching threat became aggressive and adroit enough to match the reserve’s combined ranger-watch. “To date, interventions have focused on bringing additional manpower into the field to counter the problem,” he says. “This has proved effective in terms of arrests but not in stemming the rising body count of rhinos.

“There is a limitless recruiting pool of poachers inside and outside our borders, and they enjoy a tactical advantage against the counter-measures we’ve employed so far. They dictate the time, the place and the scale of their engagements and they hide in plain sight amongst local communities.”

The Sabi Sand properties are making a direct contribution to the national economy of R500m a year, says Andrew Parker, who has a Masters in Ecology and has worked in the SanParks business development unit in Pretoria.

“I’ve been in conservation for my entire career,” he says. “Overcoming this present scourge is a fight in which we must prevail. Our strongest available response against poaching is to cripple the business of illegal rhino horn trading before it sabotages our own existing businesses.”

The rewards for the poachers are rising as the costs for conservation agencies are similarly rising. The balance of their value chain must be reversed at its source.

Huge security costs
“Security costs are increasing. At Sabi Sand alone we are spending R6.5m on security this year which is 50% of our annual budget for the care and maintenance of the game and the infrastructure of roads, and communications. Against that expenditure the poachers are not restricted by any rules and how they respond to our policing them. We encounter incursions of poachers across our boundaries from the south, west and north.” 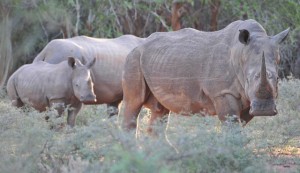 Megafauna as it should be

100 rhinos treated
Inserting a toxin into the horns of rhinos is a process which has been used on 100-plus animals in the past 18 months, pioneered by veterinary surgeon Dr Charles van Niekerk at the Rhino and Lion reserve at Kromdraai north-west of Johannesburg. The results have proved to be non-harmful to the rhinos, cost-effective, and an immediate and long-lasting solution for private game reserves which are seen as easy targets for poachers.

Quick procedure
The only possible danger to rhinos having their horns infused is the stress caused by being immobilised. For this reason, says Andrew Parker, the Sabi Sand treatments are performed outside the hottest part of the day, and the up to 2 ton animals are brought round as quickly as possible. The toxin-dye injections are administered into the horn’s inert (painless) keratin by compressed air.

The Rhino Rescue Project’s Lorinda Hern explained to the authoritative conservation magazine Scientific American in 2011 that the toxin is a compound of parasiticides which are used to control ticks on farm animals like horses, cattle and sheep. It is also ox-pecker friendly. While the treatment is for the benefit and improved health of the animals, she said, it is toxic to humans. Symptoms of ingesting the drug cocktail – in powdered rhino horn, for example – would include nausea and vomiting.

Says Andrew Parker: “We are not aiming to kill the consumers, no matter what we think of them. We want to kill the illegal trade which is preying on our herds. Once the poachers discover that rhino horn from Sabi Sand has no value they will move on. Once the risk/reward balance changes, making incursions against our own very experienced security counter measures will no longer be worth the risk.”

The SSWA has considerable support for its latest initiative. Devaluing the rhino horns is only one of three phases of its strategy to protect and conserve the Sabi Sand wildlife in the long term. Winning the war means building up and motivating a highly-skilled staff on the ground; developing an excellent intelligence network; and winning the hearts and minds of surrounding communities by involving them more and more in the business of the tourism industry.

To this end the Sabi Sand owners’ association has joined forces with powerful bodies in the public and private sectors. One is SANParks’ Working For Wildlife programme, led by Professor Guy Preston, a government-driven initiative which aims to provide funding to recruit and employ additional manpower. The private-public partnership has been piloted on the Sabi Sand and it continues to fund the recruitment, training and employment of 25 previously unemployed local youth as field rangers. 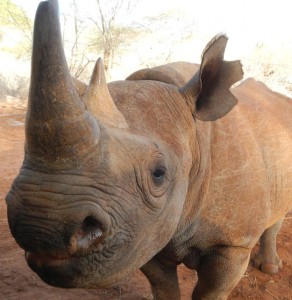 A second initiative is titled Game Reserve United. It combines the field reportage from all the game reserves west of Kruger Park from Phalaborwa to White River.

Says Parker: “The earlier poachers are located, the better we can beat them to their targets. Equipment like radar and drones would be most effective in this but they are too expensive for our budget. Good old fashioned intelligence remains our best weapon.

“The reserves are putting money into a pot under the auspices of the Wildlife and Environment Society of South Africa. This will fund reliable intelligence gathering amongst the local communities. Since the stakes are becoming so high in the illegal rhino horn trade informants are now playing both sides in order to cash in. We have to compete against these payoffs in order to identify suspects and the targets of their next raids.”

By running two forms of deterrent against the lucrative trade the Sabi Sand Wildtuin Association aims to seize the advantage against the poaching cartels in its own area and notify everyone supporting their activities from Mpumalanga to Maputo, from Vietnam to China, that we’ve moved their market’s goalposts.

“The media in South Africa and globally maintain a close watch on the shrinking herds of our rhino. The same platform can expose exactly what the poachers are up against from now on. They’ve had an easy ride so far, running a vast and brutal, hugely profitable trade under the noses of government authorities between here and Asia. Now we are forcing them to answer to their consumers about what they are passing off as medicine.”